Description of Experiment
a. Eight rhesus monkeys gathered for a two-week experiment on learning. The following puzzle was placed in the monkeys’ cages: 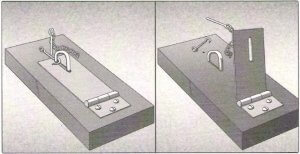 Conclusions
Scientists then knew of two main drives powering behavior: 1) intrinsic biological drives, like food, drink and sex; 2) external drives stemming from reward & punishment.
In the first section of this experiment (a.-d. above), neither of these two known drives explains the monkeys’ behavior (of solving the puzzle).
The researchers called this 3rd drive “intrinsic motivation”.  I.e. the performance of a task provided intrinsic reward; the monkeys solved the puzzle simply because they found it gratifying to solve the puzzle; they enjoyed it; the joy of the task was its own reward.
The introduction of a reward relevant for the 1st and the 2nd known motivation drivers (e. above) did not improve performance; in fact, it damaged the monkeys performance (more errors, puzzle solved less frequently).